I haven't posted a picture of the munchkins in a bit so.... see below. They are all big and stuff! (JC Penneys did the card style thing. I am not that crafty or that dedicated...). 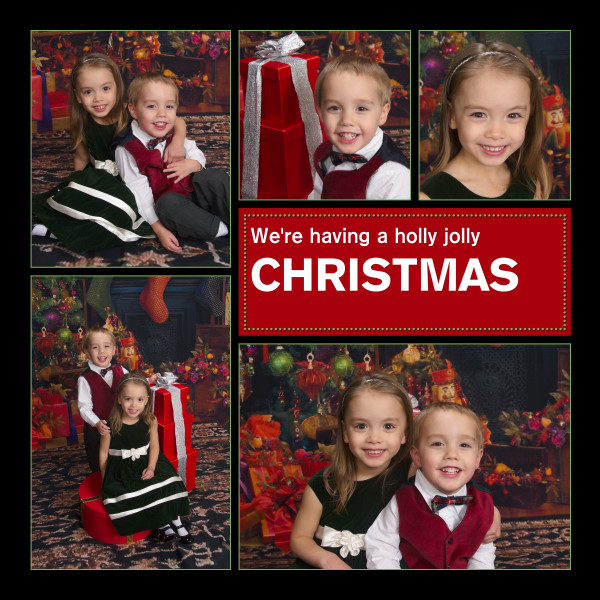 They had a great Christmas. Not only did they clean up in the toy department (trampoline AND a cat... granted it's our own cat that my brother had living with him for a while, but they don't know that... ), but they got to facetime with my grandmother twice, which was hugely exciting both for them and my grandmother.

Dan is FINALLY going to be officially converted to a permanent employee at the IRS later this month. This is GREAT news for us (no more unemployment! YAY), but we also have increasing bills and dwindling savings, so I am probably going to have to go back to work. I'm not thrilled, honestly, for a lot of reasons, but if I have to then I have to. There's also a definite possibility that my parents could have to move out of state this year and if THAT happens, then I can kiss my free childcare goodbye with them. I've made a decision not to stress over it, though. I just can't.

I haven't been writing in about a month. I haven't wanted to, honestly. But I want to want to... if that makes sense. I did already write the next ficlet in my meme (like a month ago), so I'll probably post that here in a bit and I'm going to try and make myself start on the one after. Might happen, might not.

As I do periodically, I was hunting for new shows to devour. And I struck gold. Twice! One day, after the cable went out briefly and the menu had yet to reboot itself, I was channel surfing just by hitting the channel up button and tripped past oodles of infomercials and right up to Nathan Fillion being on my TV. Naturally, I went "MAL!" and recalled that several people have mentioned Castle as being pretty good. I wholly agree with them. I watched the entire series thus far in just over a week. Yeeeeeah. That was a lot of marathoning. After I finished it (and rewatched some with

andacus as she's watching it now, too), I was twiddling my thumbs and bemoaning the length of the winter TV hiatus until I found that the entirity of Suits was On Demand and free. Now, I didn't expect much (on account of USA is a reliable network for fun, watchable shows that I will regularly tune in for but not really get hooked on), but holy shit did that show hook me (as evidenced by the awesome quote used in my subject line)! There will be more on these later. I am sure. But for now, this post is getting long. Anyone else watching Suits out there? Also... WHY isn't there a single Suits/Castle crossover on the whole of the internet? I just want Jessica Pearson (Gina Torres) to be Rick Castle's (Nathan Fillion) lawyer... with some kind of unexplained, vaguely-alluded to past that could totally also be Firefly. With all the nerds on the internet, this can't be too much to ask, can it?

So Ava turned four last weekend! Yeah... I'm not really sure how that happened either...

It was a joint birthday party with her best friend Annika, whose birthday was also last weekend, at a really awesome park nearby. Almost their whole class came (many with siblings). Annika wanted a princess themed party and Ava didn't care. As anyone who knows her might expect, Ava was more interested in being a pirate princess than any of the Disney ones...

Some of you might remember that our house backs up to her preschool playground. Well, the next day, which was her "family party" with presents and waffles and Uncle Joey (who showed up an hour and forty minutes late, the ass), the church who owns the land the preschool is on had a big "meet your neighbor" party in that park complete with bouncy castles. Ava looked out back and thought she was having the best birthday party EVER. Obviously, we went over. And, other than being quietly handed a pamphlet as we left, were shockingly not talked to about religion at all (for which I am super grateful).

In other news, it looks like Dan will probably be furloughed in December, but only for 3-4 weeks. We never really know until it happens, but that's what he thinks will happen based on the buzz around the office. It's a terrible time to be furloughed but at least it's short. More like an unpaid long vacation than anything else. We can manage, but it'll be a stressful Christmas.

I know you don't want to be mocked this year (really, who does?), so I'll go the sappy route instead. I think a person is lucky if they find even one or two people in their lives that they really, truly connect with. I'm one of the lucky ones. Thanks for being my confidant, counselor, best friend and all around hetero-lifemate. Too sappy for you? It coulda been worse. I could have used the word soulmate. Maybe next year you'll prefer to be mocked instead. :-p

Here is non-mocking, non-sappy pic spam for you to celebrate as you deserve to: ( Collapse )
Yes... Shawn has icky cradle cap and is kinda drooly... I really wish I'd wiped that drool away. Oh well, too late now! My kid has mastered climbing and pull-ups (see above) and also took her first step today! Two steps, actually, to get to Dan. She also learned to clap her hands yesterday. Sheesh! She's learning so fast. Also, her top two teeth barely broke through, finally. Those have been a long, long time coming.

I haven't posted pics in ages have I? I'll have to do that soon...

Oh hell, this stupid thing just erased everything I'd written. TWICE. MUCH FAIL, LJ. MUCH FAIL!

I'm sick, like approximately half my flist, with a cold. I have therefore been banned from going near my kid or my grandmother who is staying with us. At first I was all "SCORE! I can nap and read books and watch DVDs all I want! It will be like old times, with no 3 a.m. feedings!" Only... apparently somewhere in the past few months I developed some kind of maternal instinct because it's literally making me twitchy to not go cuddle Ava when she cries. Like, it seriously takes effort to NOT go and OMG that sucks.

On the up side, we got back her Christmas pictures and they are SO CUTE. Therefore, I'm subjecting you all to them. Yeah, I'm totally "that mom" aren't I? I'd say I'm sorry, but I'm not.


Now, you people tell me... how do you pick which of those to buy? HOW? This is how they make a fortune off of you. OMG.

Also, 8 inches of snow forecast for tomorrow? On top of the four or so currently on the ground and then a huge ice storm over the weekend? Hi Portland, New England called and they'd like their weather back. This totally never happens here.

...so we are staying in! But, the snow is still pretty out the window... and the kid is super cute and warm. I know I just did a baby pic spam, but this was just too cute to not share!

My kid, let me show her to you! Or, you know, you can skip this post... but I'm putting one shot not behind a cut. BECAUSE I CAN.