Exchanged where late the sweet birds sang for a copy that wasn't missing a page and was SO HAPPY to find it had dropped in price by $6. Accordingly, I picked up another book - Wastelands: Stories of the Apocalypse - which is an anthology of short stories including some by George R R Martin, Octavia E Butler, and Orson Scott Card. I'm silly amounts of excited.

I finished where late the sweet birds sang and liked the last half of the book much more than the first half. I love it's themes and messaging, but it feels to me like it ought to have been a much shorter story. The settings are meticulously and beautifully detailed, but most of the characters feel interchangeable (intentionally, I think) and some whole lines of plot feel utterly pointless (unintentionally, I presume). I'm glad I read it and I will probably keep it, but I'm far more likely to pull Alas, Babylon or Earth Abides off the shelf for a reread than this.

On to the anthology! So stupidly excited...

So I've been reading actual books lately. Like, printed on paper and everything. I KNOW. How very archaic of me. Anyhow, I thought I'd give a brief rundown and opinion on a few because a) I never seem to post anything anymore and b) I'm never short on opinions. SO... here we go...

(Spoilers are pretty minor throughout)


3) The Twelve by Justin Cronin
( Collapse )


I'm reading another book now, where late the sweet birds sang by Kate Wilhelm, but the stupid publisher missed a rather important page right in the middle of the book, so I'm going to try and go exchange it tomorrow. Still, I'll say this about it. It's a 1970s Hugo award winner about a small town who survives the apocalypse (What? I have a certain kind of story I really, really like...) only to find they've all been turned barren. They turn to cloning to prolong the life of the human species. The story appears to predominately be about these clones who share a mental bond and shun "breeders" (those amongst the clones who aren't barren), their elders and anyone with a sense of individuality. Thus far, I'm not loving the book, but I suspect that's largely because of intentionally bland characterization meant to show the interchangeable nature of the identical clones. I'm hoping the last half of the book will be more engaging.

Anyone read any of these?? Opinions jive or am I kooky?

So, I've been getting some writing done. Not as much as I'd like and not necessarily in the fics I'd most like to be working on, but it's still a good thing. Finished a 5k Revolution fic (IDEK, it hit me and it needed to happen) today. Awaiting a beta before I post it. It's the closest to slash I've ever written, honestly. More Monroe/inferiority-complex than anything else but definite undertones of Miles/Monroe throughout. Anyhow, it has lots of skewed navel-gazing and parenthetical asides and metaphors and I mostly am pretty darn happy with it. It's called Toy Soldiers and I expect I'll post it here in a couple of days (though if someone on my flist is secretly a crazed Revolution fan and wants a sneak peek, I wouldn't say no to a second beta on it).

Next writing project is back to working on my Castle meta fic (Death of a Fangirl). I need to rewatch "Sucker Punch" because I'm using the Westies in it and I wanna get Finn Rourke's voice right (darn... such a trial rewatching Castle. :-p). I'm about 5.5k into the fic, which I plan to run about 25-30k (as if my plans ever actually happen).

In non-fanish news... Tuesday after swimming class, Shawn (who is three) slipped and face-planted on the wet floor of the bathroom and completely shattered a front tooth. I'm not gonna lie, I panicked. Kinda stupidly. He's fine now, but he did have to have what was left of the tooth extracted and they won't know if there was damage to his permanent tooth until it comes it. Tooth fairy brought him an etch-a-sketch and me a six-pack of beer (I feel I earned it; thank you, tooth fairy).

Otherwise things are good. My parents got back from their three week cruise/vacation this week and the kids are over the moon that they're back. Ava misses school (which has been out for almost a month now), but I've been keeping the kids pretty busy so she's coping. OH and she's OBSESSED with the Sims on the ipad (this is genetic, maybe?). The ipad version of the sims has them do everything in real time. So, like, if they sleep for eight hours, they sleep for eight hours. She will sit there and watch them do this. She also has started walking around speaking Simlish, which is hilarious. Pic below was taken this morning. 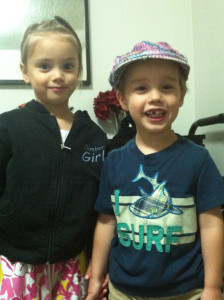 Since I'm going ridiculously long on some of these, I'm posting three a day (in theory) for a week.

Meme: Step 1: Write down the names of 10 characters. Step 2: Write a fic of [at least] twenty five words for every prompt, using the characters determined by the numbers. DO NOT read the prompts before you do step 1.
( Collapse )( Collapse )
FAIR WARNING - Some of these will be NC-17 (at least... they should be). The prompts gave me het, slash, femmeslash and threesomes (knowing me, I'm unlikely to get explicit on the slash or femmeslash). Also, I will be playing fast-and-loose both with canon(s) and with the interpretation of prompts. Additionally, some of my Marvel-universe knowledge is from Wiki and it probably shows. Also, as always, credit to

andacus for listening to me talk ad nausem about story concepts and writing. <3

1) Dan will be on furlough (probably not for terribly long... a month or so) starting somewhere between ten days from now and November 22nd. Honestly? I'm kinda looking forward to it. Also? He shaved his head. I'm not certain, but I think it might have been partly due to much talk about how Wentworth Miller is ridiculously hot... It looks good, honestly. He's had the same haircut since he was 16 and it was making him look younger than he is (not in a great way).

2) Ava has been.... let's go with 'challenging' lately. Extremely argumentative, a little bit of regression in maturity, clingy, somewhat agressive (bit the hell out of her poor brother yesterday) and generally wildly frustrating. Screaming in my face is not okay. Copying everything I say is annoying as all hell. Acting like a baby is just ridiculous. And kicking/hitting/biting is seriously a problem. I know this isn't abnormal for a four-year-old (even though it's totally not acceptable) and I'm coping and working with her, but I won't say the frustration hasn't reduced me to tears a couple of times.

3) I have done zero plotting for my next story in my Prison Break series. Ooops? I was going to do it for NaNoWriMo, but frankly I don't know how that works with two preschool aged kids (especially when Ava is acting like this). I don't have three or four hours a day to commit. I just... I don't. Really, I don't know how I did it last time. And honestly I really want finish "Four Girls Sirius Black Could Have Fallen in Love With (And One He Did)" because it's been sitting 90% finished for like... eight months. So... yeah that's coming first (probably after the canon ending I'm writing an epilogue with AU endings because DAMN but canon is depressing like woah). So... it'll happen. Just probably not by the end of the year (though possibly I'll get a good chunk done once Dan's on furlough).

4) So, I'm watching Vampire Diaries (of course), Walking Dead, Revolution and Arrow (for now) this season. Anything rocking I'm missing out on? Vampire Diaries' premiere underwhelmed me (but their premiere always seems to?), Walking Dead was pretty great (though I desperately wanted to point out to Lori that if she dies in childbirth and comes back a walker, her baby is dead no matter what because it's not like they have baby formula lying around), Revolution feels like it's still finding its footing but I think it could be great if Charlie became less unrealistically naive and irksome, and Arrow... well, you just keep doing half-naked gratuitous excersize scenes and I'll keep on watching, mkay?

5) Guild Wars 2 has kinda fizzled for me. Loved it to start with but high end content is madly lacking and people creating drama is absurdly annoying. Don't they play these kind of games to get away from drama in their lives? I'm kinda wanting to play some Sims? Lets pretend I have time for either of these things.

6) The Twelve (sequel to The Passage) came out Tuesday! I was there when the bookstore opened to buy it. I've only had time to read the prologue so far, but I'm super excited about it. I do wish I hadn't loaned out The Passage though because I feel like I really could use a refresher...Anyhow, if you like zombies or apocolypses, go get these books. For srs. It's good stuff.

I know there's other things but my brain doesn't work today... So, anyhow, there's a brief update on my life. FUN TIMES RIGHT? I lead such an exciting existence...

If anyone happens to be looking for a good opportunity to start their own business, let me just say that there appear to be NO WHERE near enough moving companies in Portland, Oregon. I finally found someone with an availability for Saturday but it was the fifth place I called . Sheesh!

On another note, am I the only person seriously looking forward to Revolution? We all know I'm a post-apocolyptic storyline junkie, but I am squeeing with excitement every time I see a commercial.
Collapse